In Harvest Moon: Back to Nature you have the opportunity to marry one of five different girls. You don’t have to marry but if you do you’ll get 1% added to your farm percentage for each heart level your wife has. 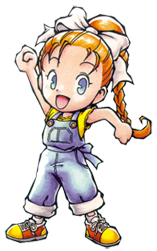 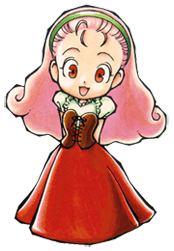 In this videogame each girl has a hidden affection stat that increases or decreases based on what gifts you give them and how you respond during certain event scenes. As the girl’s affection increases she will go through 7 heart levels and when she reaches the final heart level you can propose.

The girls will also gain +200 affection at the beginning of every day if you either gave them a gift or spoke to them on the day before.

If you have an animal die in this videogame then all the girls will lose 1,000 affection.

There are also several events with each girl that you can trigger in Harvest Moon: Back to Nature if you meet certain conditions. During these events you’ll often get the opportunity to make a choice which will either get you a pretty large amount of affection points, do nothing, or lower their affection levels.

The standard dating sim logic applies in this videogame, more often than not just tell the girl what she wants to hear and that will be the best choice.

There seems to be an event for each heart level with each girl but unfortunately there’s very little information about them on the Internet. Random guides seem to have one or two of the first events for each girl but that’s the best information you’re going to find.

I haven’t listed the events here because I didn’t want to include incomplete information. 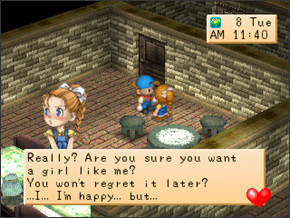 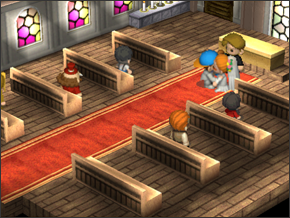 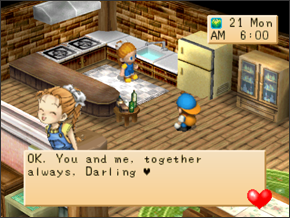 To get married in Harvest Moon: Back to Nature you need the girl’s heart level to be pink. You also need to have bought two house upgrades. At this point you can buy a Blue Flower at the Supermarket. Give the feather to the girl and one week later you will be married at the church and you won’t be able to do any work that day.

Won might come by your farm and try to sell you the Blue Flower for something ridiculous like 30,000g but don’t by it from him. It’s at the Supermarket in this videogame for a lot less.

Your wife can leave you too. If you give her a ton of gifts she hates and her affection drops below 5,000 she will leave you. You can get her back though by visiting her at her old home and apologizing. After you apologize her affection will increase by 30,000 points. 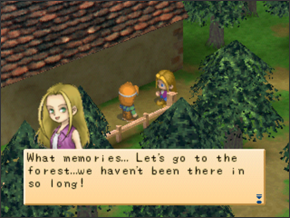 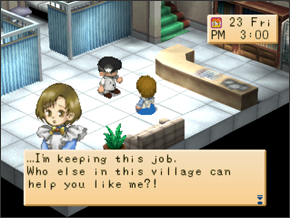 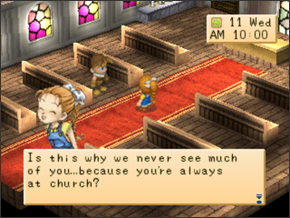 Each one of the girls has a rival who she can marry if you don’t marry her. It seems that rivals can marry the girls at any point from year 3 and on in this videogame.

To get a rival to marry a particular girl you have to watch a series of “rival heart events” with each girl and rival. Each of these events have certain conditions that have to be met before you can view them. Unfortunately though, no one seems to really know what all the conditions are for all these scenes.

There’s very little information about these rival events on the Internet also so you’re probably just going to have to go to as many places as possible and hope you trigger them. Hopefully by the end of year three you should have encountered most of them on your own anyways.

If you get married before year 3 then you don’t have to worry at all about the girl you want marrying her rival.

Also, it doesn’t matter how much a girl likes you. If it’s after year 3 and you’ve seen all the “rival heart events” she will still marry the rival, even if she has a pink heart level with you. 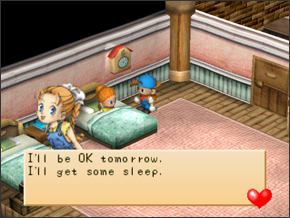 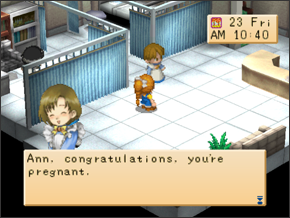 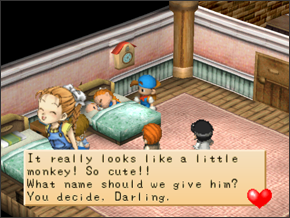 In Harvest Moon: Back to Nature after you’ve been married for 32 days your wife will become pregnant and 58 days later she will have your kid.

At the start of the pregnancy your wife will start complaining about not feeling well. When this happens you have to go to the hospital some time in the next 8 days and the doctor will diagnose her as pregnant.

If you fail to take her to the hospital in those 8 days your wife will get very sick and lose some affection points.

On the day that your kid is born you won’t be able to do any work. Your baby starts off with 50 affection points in this videogame and you can’t give him any gifts until 60 days after he’s been born.

Your child’s likes and dislikes

Your child has a max affection amount of 255 and gains the same amount amount of affection points from gifts as the rest of the villagers.