There are a several sort of "secrets" in Harvest Moon: Back to Nature. These are things that aren’t well known and that you might not figure out on your own just by playing the game. 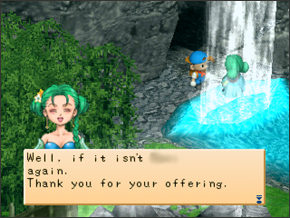 If you throw a crop you grow or some kind of animal product into the pond by the waterfall the Harvest Goddess will appear and thank you for your gift.

If you continue to give her gifts in this videogame she’ll give you days with good weather. 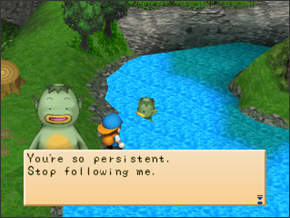 If you throw cucumbers into the lake on the mountain where the Winter Mine is a Kappa will appear. It will only appear after 11:00 am during the spring.

Kappas are creatures from Japanese mythology and they love Cucumbers. If you throw 3 cucumbers into the lake the Kappa will give you a Mystic Berry. 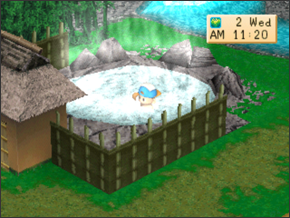 The Hot Springs in this videogame are by far the best way to recover stamina and to restore fatigue. For every in game minute that you’re inside the Hot Springs you’ll recover 2 stamina and have 1 fatigue removed.

You can stay up super late, jump in the Hot Springs for about an hour at around 4:00 am, run back to your farm and be in bed before 6:00 am. This will have a better effect on your stamina and fatigue than going to sleep at 6:00 pm and you’ll be able to get a ton more work done each day. 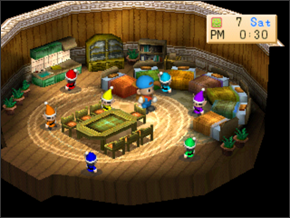 On any sunny, non-festival day during the spring visit the Harvest Sprites between 3:00 pm and 4:00 pm. Give them each a gift they love, Flour is probably the easiest. You have to give them each an item without leaving their house.

After you give them the gifts they’ll invite you to their tea party. At the end of the tea party they’ll give you Relaxation Tea Leaves which you can use to make Relaxation Tea. If you submit Relaxation Tea for the Cooking Festival in this game you’re pretty much guaranteed to win. 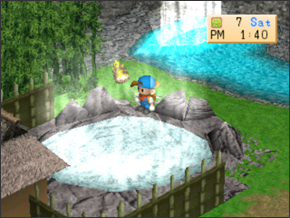 A lot of the characters in this videogame really love Spa-Boiled Eggs. To get Spa-Boiled Eggs take regular or Gold Eggs to the back of the Hot Springs and throw them in. You’ll immediately receive a Spa-Boiled Egg.

The screenshot shows exactly where to stand to throw the eggs into the Hot Springs. 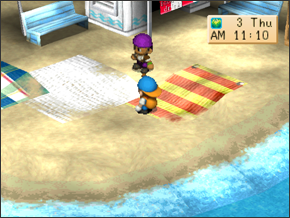 After a hurricane happens in the game you can visit the beach where you’ll find Kai. There will be an event where you get an affection bonus with Kai and you’ll get a choice between receiving a bottle or Perfume.

To trigger the event you need to have at least 120 affection with Kai. The bottle is useless but the Perfume makes a fantastic gift for the girls.

In Harvest Moon: Back to Nature there are also several rumors and cheats floating around that it turns out are not true. 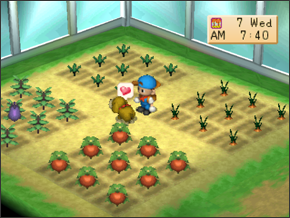 Protecting your Hothouse during a Hurricane or Blizzard

Once you buy the hothouse during the summer or winter when there is a Hurricane or Blizzard there is a chance that your hothouse can be destroyed.

There was a rumor floating around that if you left your dog inside the hothouse it couldn’t be destoryed. This is false and while I was testing things for this site I had my hothouse destroyed 4 times in one year even though my dog was inside. If your dog is inside and the hothouse gets destroyed you’ll find your dog outside randomly wandering around your farm. 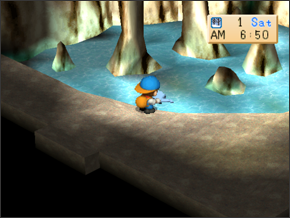 Infinite Water for your Watering Can

Another rumor about this videogame says that if you fill your watering can with water from the pond at the bottom of the Winter Mine you’ll have infinite water.

This is completely false. No matter what watering can you’re using it’ll still only hold a maximum of 100 units of water. 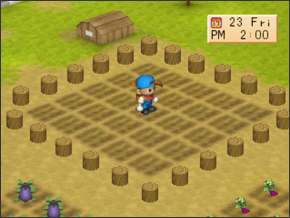 You can use the small stones to build fences instead of lumber. Your animals won’t be able to get out of inside them and they won’t break like fences made with lumber.